skip to main | skip to sidebar

It all started several years ago when I was traveling back from Paris to Atlanta. My plane from Marseille was delayed, so I arrived at the gate, panting, disheveled, and utterly panicked that I would miss my flight. I remember the ticket agent putting my boarding pass through the scanner and the machine uttering a little hiccup, as the attendant said (what would become some of my favorite words), “Un moment, s'il vous plait.” She then apologized for the delay and explained that I had been upgraded to Business class, and so they had to reissue a ticket. 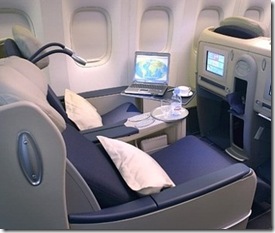 Moi? Upgraded? Why? I was delighted but I couldn’t help wondering why they’d picked me, the most disheveled passenger, for an upgrade. Of course I accepted it graciously and savored everything from the foie gras, to the fine selection of cheeses, wines, leg room, movies and music. In fact I was so delighted that I did what any well brought up woman would do, after being treated to a fine experience: I wrote a thank you note to Air France.

A few months later, I was again traveling back from France, and the very same hiccup happened at the gate. The funny thing is, I was actually furious with the airline for cutting my connection too short in Paris so that, once again, I almost missed my flight to Atlanta. I arrived at the counter, breathless and poised to complain, when I heard the little hiccup as the agent scanned my boarding pass, and she uttered those welcome words, “Un moment, s'il vous plait,” before delivering the good news.

The third time it happened, a few months later, I figured the hiccup was Air France’s way of apologizing for their unreasonably tight connections in Paris, and this was their way of making it up to me. I decided then and there that I could deal with that tight connection!

But the next time it happened, I was traveling the other way, from Atlanta to Paris. This time there was nothing to complain about. And so this time, I figured it must have been a case of mistaken identity, and that for some reason, Air France thought I was a celebrity. Of course I didn’t want to shatter that illusion, so I went along happily for the ride, and tried to be an appropriately modest and low maintenance celebrity. For several years, I enjoyed being upgraded on just about every flight.

And then they didn’t just upgrade me … they upgraded my whole family. I had never really wanted my daughters to get a taste of business class, but they did, several times, thanks to Air France. A couple of times I got upgraded to First class, because Business Class was full. One time, when I was traveling with my children, they apologized for breaking us up. Not a problem, I told them … my girls would be fine alone in Business. The hiccup at the gate became a wonderful tradition and I was totally hooked as Air France’s most loyal frequent flyer.

And then one day, it ended.

It was the first trip I took with Meg, my wonderful business partner. Although I tried not to take anything for granted because I was still sure it was a case of mistaken identity, I did rather cavalierly tell Meg to stick with me, kid, ‘cause we’d probably both get upgraded. But pas du tout. Not a hiccup. Not even a burp at the gate. In fact, not only did we get the back of the plane, but – and this will be an “aventure” for another blog, I’m sure – my passport was stolen on the flight! Poor Meg thought that she was going to ride with me in the front of the plane and instead she rode with me to the Commissariat de Police at Charles de Gaulle airport.

To my regret, at a cocktail party a few years ago, I made the mistake of telling an acquaintance who was very high up at a competing airline that I was the beneficiary of something mysteriously wonderful at Air France, and she was horrified and said, “Well that’s not right – they shouldn’t be doing that.” I’m not sure if there was any connection with this regrettable slip of the tongue or if my demise was simply a result of Air France’s merger with KLM, which happened to coincide with the end of my benefits. But whatever the cause, I have not been upgraded since. 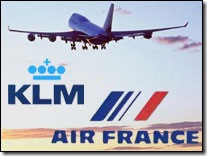 Recently traveling on Delta, where I am a little nobody and never get upgraded at all, I realized that there is something to be said for the level playing field which eliminates that inevitable sense excitement and disappointment. I’m not expecting the hiccup when the machine swallows my boarding pass. I know that I’ll have the seat I was assigned to, and I have learned, over the years, how to make that just fine (enhanced by bringing along some treats from a favorite “traiteur” in Paris and traveling off season, for more legroom …. but that’s also for another blog).

Posted by Love of Provence at 6:45 PM

what a great story - i would love to know why it happened too - if you ever find out you can finish the story!

Just was introduced to your website through a friend who has booked your house near Gordes. What a wonderful story - there is always something so special about being upgraded, but time and time again - what a delight. By the looks of your house and apartment you are a lovely lady with beautiful taste. Enjoy your life in France.

Love of Provence
I love to sit on our terrace overlooking the Luberon valley in Provence, taking in the scents, sounds and spectacular sights, dreaming about our next meal, writing about the last one, while working (remotely) for my wonderful art gallery in Atlanta, Huff Harrington Fine Art. After ten years of loving the Provence life, I'm on to a new adventure: Finding and hopefully buying an apartment in Paris. If you're passionate about French architecture, design, art, houses, Paris, Provence, long lunches, great wine and wonderful conversations with friends and family, you're probably a lot like me! Hopefully you'll enjoy reading this blog as much as I love writing it.